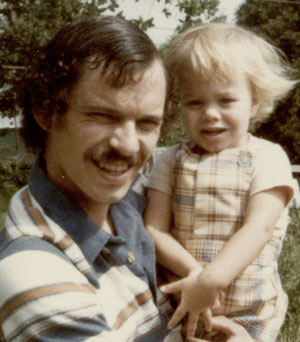 My Dad and Me

Growing up I wasn’t exposed to issues of racism in any significant way, at least so I thought. If my dad ever mentioned the word, I don’t remember. He may have mentioned someone’s race in passing, as a way to identify the person (e.g., “the Chinese lady”), but that’s it.

As a child, I thought little about race. I’m sure it was brought up in school in lessons about the civil war, but that was a long time ago. At home, race was a non-issue. In fact, my first personal exposure to the issue of racism (that I remember in a significant way) occurred during junior high school.

One of my neighbor friends was Korean, a fact I didn’t give any thought until we had had a falling out and he nearly assaulted me (unprovoked) on my way home from school one day. He was suspended from school for the incident, but I gave the issue of racism a lot of thought after that. Our teachers seemed to believe *his* accusation of *me* of calling him a racist remark that sparked the incident. This was despite the fact that he was exposed, repeatedly, as a liar and a bully. Even though I had told the truth throughout the whole incident, while my former friend told a different version of his story every time he told it, the school administrators seemed to believe he was motivated by a reaction to a racist remark that I never made. That was my first major experience with racism. My father defended and believed me completely.

When I was in high school, one day I brought two or three friends over (I forget why), and one of them was black. This was the first time I recall a black friend of mine coming over to our house. My dad gave them all a disinterested “hello” and left us mostly alone — exactly what he did when any of my other friends came over. He never brought up his race to me afterwards, either. It truly was, for him, irrelevant.

I never noticed my dad’s lack of racism. It just never occurred to me. Why would it?

It wasn’t until one day during during my late high schools years that I distinctly remember my step-mother complimenting my father for being the least racist person she knew. At first I thought that was the most bizarre compliment, because I had never heard my dad talk about racism. He never spoke about the virtues of judging others based on their character and actions, not their race. He never preached these ideas — he lived them.

Now, as a new parent, I’ve given much thought about how I want to raise my children. Finding Magda Gerber’s RIE parenting philosophy is one of the most fortunate discoveries my wife and I have made as parents. Gerber’s approach champions modeling the behaviors and values you want to instill in your children, not preaching them. We do not force “please” and “thank you,” for example, we model them. We trust that our children will learn on their own and in their own time.

Like the twist at the end of a good movie (e.g., The Sixth Sense), I only realized as a teenager this important lesson about racism. Yet, my father had been teaching me this lesson the whole time and I didn’t even know it. That was far more powerful to me than any lecture or intellectual argument I could have received.