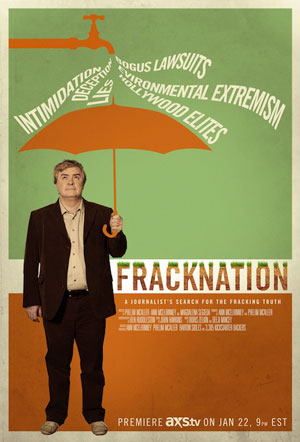 Last week I attended a screening of FrackNation, a documentary dedicated to debunking many of the myths of hydraulic fracturing (or frac’ing), including those presented the Oscar nominated documentary, GasLand. The film takes us on a journey with investigative journalist and documentarian Phelim McAleer on his quest for the truth about frac’ing.

Sure to be well received by Objectivists, conservatives (well, some of them) and other free market and industry friendly groups, the picture presents a clear and resolute answer to the mischaracterizations that frac’ing receives by the predominantly left-leaning media and Hollywood. But it should appeal to wider audience as well because it presents its case in a well-told and entertaining way.

The most well-known scene in GasLand involves a man who claims nearby frac’ing has polluted his water so badly that he can light his kitchen sink water on fire. When we see it actually happen it is an impactful visual stunt.  Unfortunately, as FrackNation shows, methane found in this water has nothing to do with nearby frac’ing and, in fact, such pollutants have been found in this particular town’s water for decades before any drilling ever took place. A fact that GasLand‘s Josh Fox doesn’t think is very relevant (though he regretfully seems to admit it in one scene in FrackNation).

Apart from exposing the dishonest approach that documentarian (if you can call him that) Josh Fox takes in GasLand, FrackNation proceeds to show the truth about this method of drilling for natural gas. It sets the records straight on several of the most common charges you have probably heard in the media about frac’ing.

Does frac’ing cause earthquakes? No. In fact, the movie points out, geothermal electricity production is a much more seismic activity. Does frac’ing polute the water supply? No. Does it cause higher rates of cancer in areas being drilled? No. In fact, GasLand seems to have misled, fabricated or lied about many, many facts surround the effects of frac’ing.

Point by point the film exposes the most common misconceptions in a clear and easy to understand way. By the time you are finished with the movie, you will wonder how such widespread misconceptions are possible about this valuable and produce method of drilling for natural gas.

Besides the truth about frac’ing, which alone is worth the price of admission, FrackNation also exposes the methods by which the left-leaning and other environmentalist groups will go to champion their cause. From misleading information, to omitting relevant and important evidence, to just simple outright lies, FrackNation gives us an almost “behind-the-scenes” look at these lying activists in action.

Most alarming is that the media and much of the American public fall for it–accepting and repeating fantastic and unsubstantiated claims without even so much as doing a reality check for themselves. Thankfully there are some who are willing to think, and Phelim McAleer and his team helps us do that reality check that is badly needed on this issue.

The picture will be televised January 22 on AXS.tv. More information about the movie can be found at www.FrackNation.com.

PS — On a related note, I highly recommend reading Alex Epstein’s review of Matt Damon and John Krasinski’s Promised Land (another anti-frac’ing film from Hollywood), which gives a philosophical answer to the dangers of frack’ing–as well as the dangers of NOT frac’ing (“Promised Land Slanders the Frac’ing Revolution”).