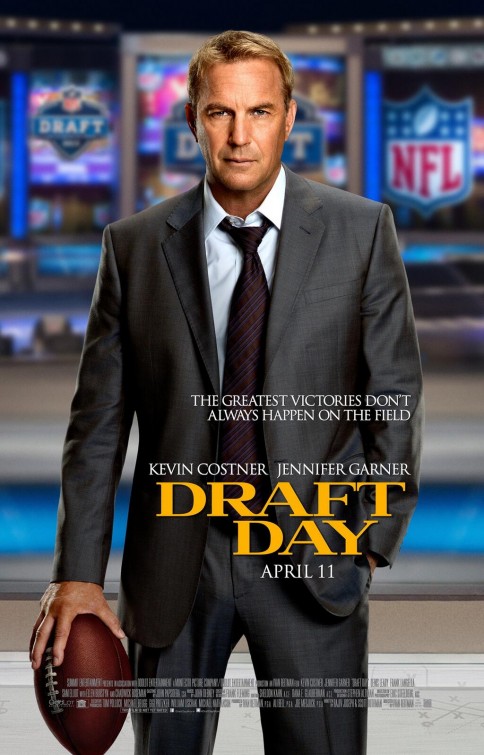 Draft Day, starring Kevin Costner as a draft picker for an NFL football team, is an exciting sports drama that is sure to satisfy football lovers as well as those who know very little about the game (I fall the later category).

What makes the film work is its high stakes and time sensitive negotiations and deal making that transpire throughout the film. Each year in the NFL, teams draft new players and, somehow, some teams get to pick their favorite new players sooner than others (they are mostly players from college football, I gather). I’m sure sports fans know the details. I certainly don’t, but even a neophyte like me could follow along and know what values are at stake.

Much of the negotiation that occurs is on the phone, and this is accomplished mostly with a split screen. That gives the film a more TV-esque feel to it, but it does work because we can simultaneously see both parties in a given negotiation at the same time. That let’s the actors shine and creates a dynamic and intensity you otherwise wouldn’t get with constant back-and-forth cuts between two people talking on the phone.

The longer takes also add to the tension. Too many thrillers try to create intensity with fast cuts, which can be effective visually but emotionally is not dramatic (and is often dizzying). Fast cuts render an audience relatively passive, so by keeping the camera still and showing both people on the screen at the same time, it is the audience’s own eye that is darting back and forth between the two characters. This makes us feel more like active participants in the negotiations and draws us further into the story.

It’s also interesting to note that several recent and successful sports dramas have been much more “inside baseball” — i.e., feature off the field strategy rather than on the field action. Moneyball (starring Brad Pitt) and 42 (Harrison Ford) come to mind. Draft Day takes this one step further by showing almost no on-the-field game play.

There is no question that the rise of fantasy football leagues in past decade or so is one of the reasons Draft Day should be a success with audiences — though that is likely to be seen more in the home video market as the audience for the film skews older.

The feel good aspect and romance elements in the film work with the story, and Jennifer Garner as both girlfriend and co-worker to Kevin Costner delivers an acceptable and convincing performance. What’s most refreshing is that we see that it’s okay for women to love sports as much — perhaps even more so — than the next guy.

John Debney, whose Jobs score was one of the best of 2013, delivers a serviceable score. Likely the aim was to match the high energy feel of sports talk TV shows, so on those terms it is a success. It’s best moments, though, are played during the touchy-feely scenes, and the track “We’re Going to Have a Baby” from the album is a good example of that (that track title is not a spoiler, thankfully).

If you missed Draft Day in theaters, put it on your radar for home viewing. It’s high stakes fun that also does not require you to be a sports nerd to follow.

This movie was screened in a theater in San Diego, full price ticket paid by the author. This review was originally published on Soundtrack.Net