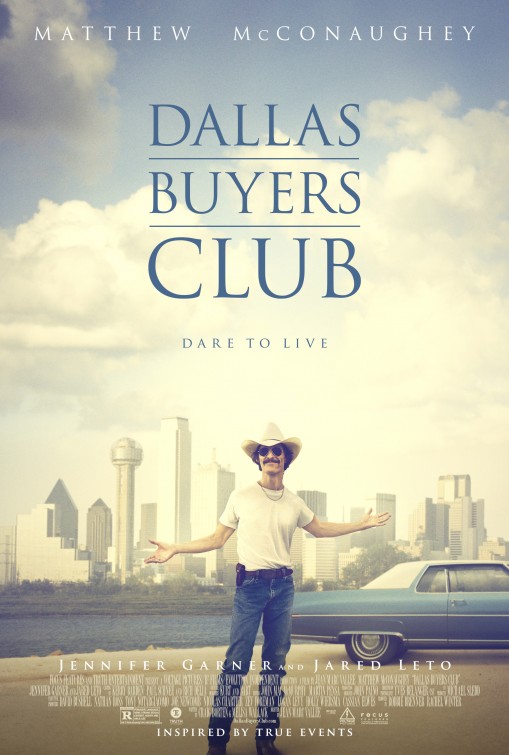 As a man-fights-the-system film, Dallas Buyers Club works wonderfully. Matthew McConauhey’s Oscar winning performance is worthy, as is supporting actor Jared Leto (who also won an Oscar). There is a lot to cheer for, and McConauhey’s performance as Ron Woodroof portraying an unlikable rodeo-riding, gambling, sex addicted homophobe turned hero, is convincing. We don’t actually start to root and care for him until he is in the fight for his life, obstructed by the FDA and other government agencies who want to prevent him from obtaining and distributing drugs that will help him in his fight against AIDS.

When first diagnosed with HIV and given 30 days to live, Woodroof is in denial and rejects his death sentence. Then, fueled by self-preservation, this loser turned hero does what it takes to live: he does his homework.

This is 1985, when much less was known about the disease than today. Woodroof discovers that there are drugs that can help his condition and extend his life, though such drugs were never offered to him in the hospital and not approved by the US government for use. He must smuggle these drugs into the country from Mexico, using loopholes in the law or by outright breaking it. But he does and soon wishes to capitalize on his new-found knowledge by selling the drugs to other AIDS patients as well.

In this process, he teams up with a transvestite (Jared Leto) to help operate his business — no small feat for someone who is the epitome of a bigot. But the profit motive doesn’t discriminate, and Woodroof reluctantly accepts and comes to befriend the person he once loathed. For once in a major Hollywood movie, finally, the profit motive is used as an agent of virtue rather than a vice.

There are parts that don’t work. Jennifer Garner as a reluctant but sympathetic doctor is rather lame and the plot unfolds more mechanically than dramatically. There is a depth that is lacking here, though I hesitate to even say that in a field of shallow or downright awful motion pictures so often produced by Hollywood. There is no score, which would have helped smooth out some of these issues.

But McConauhey’s and Leto’s performances show us what the rest of the film almost was: a brilliant example of the individual rising up against evils of government coercion and the triumph of the profit motive. It is about the daring, not just to survive, but to live.

This movie was screened at my home via a Netflix rental on Blu-ray. This review was originally published on Soundtrack.Net