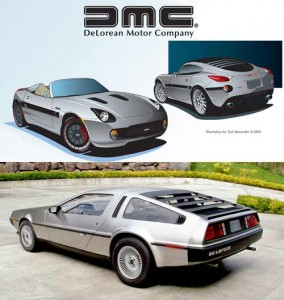 A new DeLorean may be in the works, which appears to be based on the Saturn Sky / Pontiac Solstice two-seater made by General Motors. It’s not clear if the car will be all stainless steel, like it’s predecessor, or just painted silver.

The DeLorean, of course, was the time travel vehicle in Back to the Future, and a new version of the car ripens the franchise for a remake. Fans of the movies would likely go ballistic, so you do the only thing you can do: make it a television series.

Here’s the pitch: It’s Quantum Leap in a new model DeLorean, except the hero chooses where back in time (or the future) to go. Instead of jumping into the body of the person who the main character has to “fix,” he takes that person in present day back (or forward) through time in order to influence their choices in the past (or present). Themes of free will and the many nuances that show how one’s choices and actions leads to specific consequences in life would be common among the episodes.

How about this to replace the failing Knight Rider revival over at NBC? Hire some Star Trek: The Next Generation writers to get things going and it’ll be a hit.