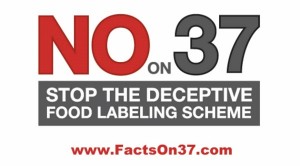 One wonders why proponents of non-GMO foods don’t just let the market take care of this itself–plenty of foods at Whole Foods and elsewhere are already labeled as “Non-GMO.” Those seeking out such foods are free to buy them, and if the market is big enough, many more manufacturers will label their foods as needed (or go out of business).

I suspect these efforts are nothing more than an anti-science, environmentalist scare tactic (look up the GMO food Golden Rice, for example, and you will see the impact of forcing non-GMO foods out of use).

If the proponents of Prop 37 are so convinced of the dangers of GMOs, why not spend their efforts educating the public and persuading food manufacturers in a voluntary way, rather than by force?  You cannot force people accept your ideas, and coerced labeling will largely go ignored if people don’t already care about it anyway (just as those “this area causes cancer” signs mandated by Prop 65 are largely ignored).

If you care about non-GMO food, buy food labeled as such. That is the best message you can send to manufacturers about what kinds of food you want to buy.  And if you wish to persuade me or anyone else of the so-called dangers of GMOs, make your arguments based on the evidence; but don’t force it down our throats.

This is a matter of principle. There is no such thing as a “right to know,” especially at someone else’s expense. Say no on 37.