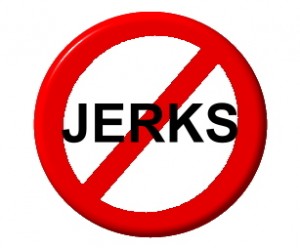 There are two kinds of jerks in this world: The first thinks he’s better than everyone else; the second thinks everyone else is beneath him. It is a subtle—yet crucial—distinction.

The first kind of jerk is the better of the two. He usually has some redemptive value. Sometimes he generates good ideas, has at least one admirable quality or a genuine accomplishment under his belt. He may be your jerk boss, jerk colleague, a jerk celebrity or jerk commentator, and can be tolerable in moderation. This type is known as the plain old-fashioned Jerk.

Some Jerks may be extremely skilled or talented, but they earn their Jerk status because they rub it in and put others down in the process. They treat the rest of the world as a step below them because they feel they are a step above everyone else. They are insensitive and often careless. They don’t listen. They talk too loud and without thinking. Other times they talk too softly so one has to strain to hear them. They think they’re funny, charming, handsome and likable but fall short in at least two of these categories.

Such behaviors give the Jerk a false boost of self-worth and an overinflated sense of self-esteem. It is a shame because there are Jerks who have real talent and would float just fine, self-esteem wise, without the jerkery. They think they can get by on talent alone—and sometimes they can. They do not realize, however, that in the long run this limits their potential.

These Jerks are usually redeemable, however. Sometimes they’re not even aware they’ve been Jerks. At some point they may introspect and decide to change for the better. They begin to recognize they can gain perspective from a wide variety of people, regardless of intelligence or talent. They start to listen. They stop comparing themselves to others as a means of evaluating themselves. They become Sympathetic Jerks first and then, eventually, nice people and “grounded,” as is sometimes described of accomplished yet humble individuals.

All of us have probably been a Jerk in some capacity at some point in our lives. We may have felt guilty for it, and learned a valuable lesson as a result. If that’s you, don’t fret. You are in good company and we can still be friends.

But there is the other kind of jerk that should be identified and exiled: the unredeemable, Jerk-Ass kind of jerk.

This Jerk-Ass knows he is a Jerk, is proud of it and tries to be the “best” among his kind. He’s also a fraud. He too may be your boss or someone in power, though he often doesn’t stay there for long. He fakes his way through meetings, bullshits to get ahead or get by, and is generally rude for no reason other than he thinks the rest of the world is beneath him.

Anyone he identifies as smarter or more talented is still beneath him, in his eyes. He attributes others’ success to luck, and his own winnings to bending the rules of “the game”—whichever game it is he thinks he’s playing. To him, everything is a game and there is always a shortcut.

Jerk-Asses often think they’re getting away with being a jerk. They even think they can be a jerk to you without you knowing it. The worst ones try to gain your esteem because they’re such a jerk to you. Often they’re a big fish in a little pond.

The Jerk-Ass will never look you in the eye. Or, if he’s at the top of his game, he will always do it and then accuse you of being a Jerk for not returning his stare. In e-mails, the Jerk-Ass never uses punctuation and never proofreads. He fails to provide sufficient context in his communications. If you don’t get his point, it’s your fault and you’re a moron for not understanding. If the Jerk-Ass is a writer by profession and can’t get away with this, the over-use of commas is a dead giveaway. The bottom line is that he makes it difficult to understand or question what he is saying, hoping you will think he is brilliant as a result. Don’t be fooled.

There is no rehabilitating Jerk-Asses. They are dishonest, manipulative, unredeemable souls, the most vile of creatures who should be avoided like the plague. They back-stab, cheat and lie. They bribe, blackmail and extort if they think it will serve them, and will do it all in the name of justice. Often they get away with their shenanigans—at least for a while—which only boosts their false sense of self-worth.

Jerk-Asses are loners, but they also congregate if it serves a purpose. Sometimes that purpose is to just jerk other Jerk-Asses around. Often they group together to beat out some other group of Jerks, such as in sports or business.

If you work with or for a Jerk-Ass, or find yourself otherwise entangled in a menagerie of Jerks, run for the hills. Find a new person or company to work for, or find a new group of friends to enjoy your hobbies with, even if they’re introvert types of hobbies like app games to win real money. There are never any values to be gained from a Jerk-Ass.

Denounce Jerk-Asses when possible. Call their bluff and don’t let them get away with their B.S., and be ready for them to question your intelligence, integrity and moral character if you do. Sometimes they may hold some power to harm you if you speak out, as this is a post they often seek and sometimes gain without you even being aware of it. If this is the case, say what you can or at least quietly walk away and never deal with them again.

So, the next time you run into someone and think he’s a jerk, stop and consider exactly what kind of jerk he is (or she, women can be Jerks too, though it is more rare). It will save you time in the long run and will avoid involving yourself with bad, dangerous and possibly evil people.

Luckily, the worst kinds of Jerks, while more poisonous, are also more rare. Give someone the benefit of the doubt before you denounce him as a Jerk-Ass.

Don’t go overboard and think everyone’s a Jerk, either. There’s nothing wrong with boasting about your talents or strutting your skills, and you should be proud of your accomplishments. Just don’t be a Jerk about it.